For the “layered” art pieces I had originally planned on using a traditional sawtooth picture hanger on the back, but after I built out a few of them I noticed that there was no good way to get the pieces to hang either flush against the wall or parallel to the wall.  They always ended up tipping one way or another.

So, rather than using the sawtooth hanger I instead added a raised diamond of 3/16″ wood to the back with an exposed lip that you can hook over a nail or screw in the wall.  The diamond sits flush against the wall and the piece remains parallel.  In the future I’m going to use a different approach (embedding the lip directly into the back of the frame) to get the piece itself to sit flush against the wall. 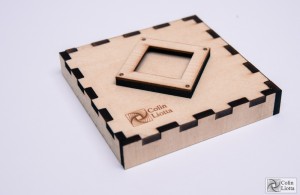